“Mr Moore-Jones, the soldier artist, who played a most heroic part in the rescue work, being perfectly oblivious to his own danger, sustained such serious burns he died this afternoon.”

Under the headline ‘Mr Moore-Jones Heroism’, the report went on:

“…Mr Moore-Jones played a heroic part in the rescue work and was particularly solicitous at the very peril of his life, for the welfare of the inmates. With the flames leaping along the passages he was seen to go back into the building and rouse the women inside, instructing them as to the exit on to the balcony. Eventually he was himself cut off and must have had to fight his way through the flames to eventually get out at the northern end of the burning building, from where he was aided down by the firemen.”

“…paid special tribute to Mr Moore-Jones gallant work in going back to save the women and everyone possible, directing them to the balcony which was the only means of escape by that time. That done he again went back into the blazing cauldron until finally forced to leave the inferno, getting himself clear with great difficulty…”

In a devastating conclusion, there were hold-ups ‘securing a conveyance’ to take the gravely injured hero to Waikato Hospital where he died a few hours later.

The public lined Victoria Street and stood in silence while his funeral cortege passed escorted by returned soldiers to the railway station for his return to Auckland. There he was given a military funeral and burial beside his daughter Norma at Purewa Cemetery. Horace Moore-Jones, soldier, artist and teacher, a hero of Hamilton. 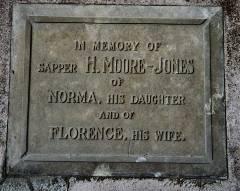 Public Reaction
Newspaper columns continued to feature the hero, with calls for more recognition and respect in Letters to the Editor:

“As the sad cortege passed through Victoria Street yesterday afternoon the thought struck more than one onlooker (apart from the knowledge of the deplorable sad disaster that happened in our midst) that common respect should have urged the general public and the drivers of vehicles to stand just a few short minutes, and that business people (who knew of the arrangements) would have closed their doors during the passing of the motor which carried the remains of the gallant Anzac who lost his life in such a tragic manner in helping to save others.
Will the rising generation learn the lesson of respect for the dead while there is such callousness shown? Is the wild rush of the present day so acute that we poor mortals are unable to spare five minutes to honour a heroic man?”

And so began the public talk of a memorial:

“Some memorial to the late Mr Moore-Jones would be a desirable public recognition of the heroic action of a gallant citizen.”

“…I suggest that some memorial should be found to his name.”

“The form of such memorial can be carefully considered later, but one certainly should have here in Auckland where he lived for so long, something to remind us of the man who fought so hard for the independence of his art, and who painted that historic series of pictures of Gallipoli, where he himself contended bravely, pictures, which unfortunately have gone to Australia instead of being retained in the country of his long residence and of his adoption.”

“The whole community vibrates in sympathy at the passing of our brave comrade and hero, H. Moore-Jones, and lovingly desires some tangible memorial.”

Horace Moore-Jones was formally recognised at the next Hamilton Borough Council meeting, and councillors also acknowledged the Fire Brigade and their council staff for their response to the disastrous fire. 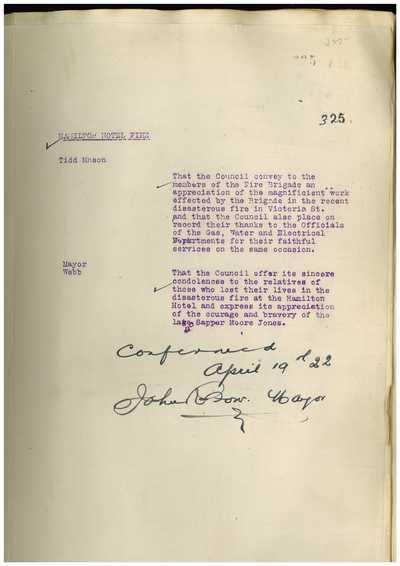 “The deceased, in endeavouring to do his best for others, had given his own life. It was a glorious end to a life which had all along been conducted on the same lines and was quite in accord with the high principles on which the deceased had acted.
The town felt proud of Mr Moore-Jones and his gallant action in which he gave his own life to save others. Although he was not a resident of Hamilton, he was here so often and was so well known to them during the war period and after that he became to be virtually recognised as one in their midst….”

The deceased will always be remembered by his Gallipoli war pictures… After the evacuation the artist elaborated them and exhibited them in England, where they attracted great attention and won golden encomiums. After the armistice the artist brought them to New Zealand, and the sensation was repeated.
Gallipoli holds sorrowful associations to many New Zealanders, and relatives of our ‘diggers’ flocked in thousands to see the pictures and sketches of the places that had become household words.

The artist offered the collection to the New Zealand government, but Massey and Co. turned the offer down, despite the strong representations that were made.
Apart from the high artistic merit of the works, there was their great historic value, and this would have increased with the years. Thus, apart from sentimental reasons the purchase of the pictures would have been “good business” for the Government. But no. Our severely materialistic Government, not having a soul above butterfat and such mundane things, would not unbutton….