We focus on value for costs.   We rely on personal and corporate offerings of goods & services, time & energy, with fundraising for specific projects. We work collaboratively and closely with our supporters. 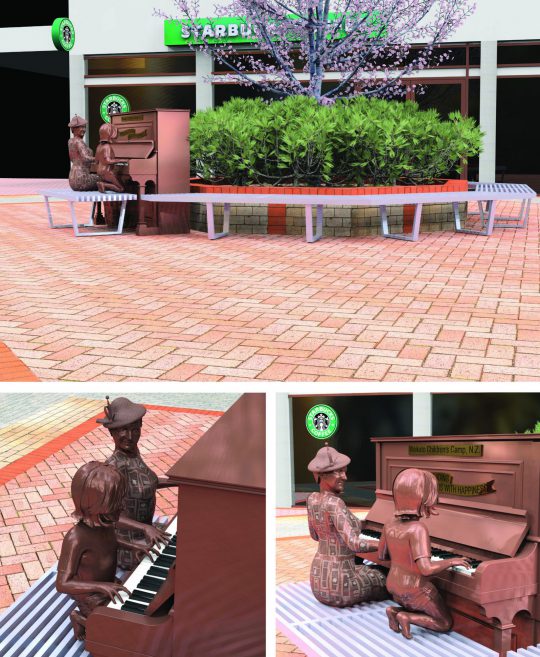 Our approved site is on the corner of Ward Street and Worley Place in Hamilton’s CBD.

Tim’s concept portrays Dame Hilda playing the piano for children at the Port Waikato Children’s Health Camp.  She was a co-founder of these camps for children from impoverished backgrounds and every summer for 25 years was ‘Camp Mother’ at Port Waikato, organising nightly concerts. The camp motto ‘Where health joins hands with happiness’ is emblazoned on the front panel of the piano.

Dame Hilda’s significant political accomplishments and ‘hands-on’ attitude stemmed from her early days of social activism, particularly concerning the welfare of women and children.  In 1941, her first political appointment was to the Waikato Hospital Board. By 1949 she had become Minister for the Welfare of Women and Children in the first National government. In 1957 she became Minister of Social Security.  She famously said “I am far more interested in the welfare of the community than in any party political warfare as such…”

Tim’s concept came up tops because of its contemporary feel which bridges the past to the present, and because it is interactive, and has particular appeal to children.  Dame Hilda was a notable high-ranking politician but was always considered approachable. Cleverly portraying this important personable characteristic and other distinctive qualities, Dame Hilda is shown to be enthusiastic, cheerful and bright or to sum up in one word – “ebullient”.  Dame Hilda dedicated her life to improving the lives of others and this statue will continue to give back to the community just as she did, for many generations to come.  Tim says his art aims “to provide content that appeals to everybody. It is my belief that art ought to be read as no more than something inherently beautiful, accessible to all, understood and appreciated by everyday people”.

We are presently fundraising for the commemorative statue and are grateful to have recently received a grant from Trust Waikato.  The public unveiling is planned for 26 May 2018, the 73rd anniversary of her victory in the 1945 Hamilton by-election which began her Parliamentary career.

You can make a donation now, or contact one of us for further info or to make arrangements for payments by instalment: